A game about figuring out the best way to progress given many options. An incremental game made for IGJ 2021 as a solo dev. Made in TMT by Acamaeda.

Full screen recommended. If you're having any display issues, you can also play at https://thepaperpilot.org/lit

Any advice how to progress? I'm at 33 light now, and progress slowed to a crawl. Can't wrap my head around what I should do instead of the balanced 9-9-9 approach with extra into blue?

The game seems really interesting, but it is almost unplayable with the current UI. There is a lot of wasted space and scrolling to the point where the part you need is almost always off screen. Looking forward to an update.

Compressing the scrollable areas down or turning the color bars on the right horizontal instead of vertical would be ideal. Can't see my progress on the right while keeping mouse on batter after 3rd green upgrade. Putting the upgrades to a grid would be ideal as well.

Also, the batteries overall need some reworking I think. Active elements should be present, but hovering to charge makes it annoying rather than fun to interact with. It is mostly an idle type game once it gets to a certain point, and I find myself waiting for emission theory to get to a rediculous point to even have a shot at the next goal which makes the "active" hover on the batteries pointless. It is also annoying that at a certain point there are too many batteries to fit on the screen at the same time, so you can't get their full potential. If you want to keep the hover, maybe make it one button instead of several and make so that one battery upgrades several times rather than having multiple batteries?

I reached the point where there were multiple batteries, and I immediately lost interest in the game. It honestly made it feel like work.

I have noticed that the fourth level of cyan doesn't seem to work? I might be misunderstanding it, but my batteries aren't charging themselves.

Be warned that there is a bug that lowers CPS if you don't refresh the page, slowed down my progression at the ~30 lights wall while using the optimal setup pinned on the discord. 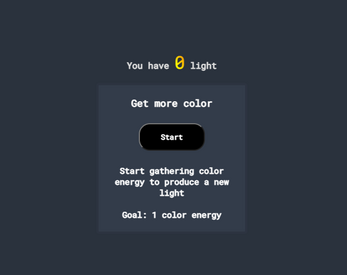