This was made for the Void development jam. I got pretty busy so it's not as polished as I like, and the code's pretty sloppy too. You can still check out the source code if you'd like at https://github.com/thepaperpilot/incremental-game-template/tree/voidlings. You can also play at tpp.rocks/voidlings.

It's a clicker mechanic that completely dwarfs all other production, on top of that it's also rng.

Having to spam click the damn thing for like 30? min before automation unlocks is really bad design.

Very cool game. I liked the wheel mechanic and the overall game interface is really crisp.

A timer would be cool! I'd replay this just to try to get a faster time.

I also suggest pausing combat whenever an Accomplishment is earned. For example, after unlocking Mass Murder, a player might want to pause combat to get those upgrades to kill more voidlings at once rather than continue to spend nanobots less efficiently.

Pretty good, I feel the wheel automation could come *slightly* sooner (maybe unlock it the prior milestone, but it triggers 5-10 seconds after the wheel stops, so you get a massive boost when reaching the current normal).

Also, the grease has the opposite effect on the wheel, no? (Since it makes it stop faster, maybe you're jamming the wheel with the void batteries, who knows XD)

Either way, a nice little incremental that manages to be incremental without being idle (which is a distinction that gets hard to make with many other games)

Cool game!  It would be helpful to see the achievement-unlock goals in addition to what they do ("am I anywhere near getting the next kind of upgrade?").

Love the wheel, its super addicting to spin it over and over again trying to get the best results :D 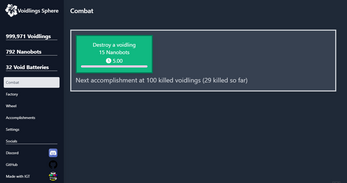 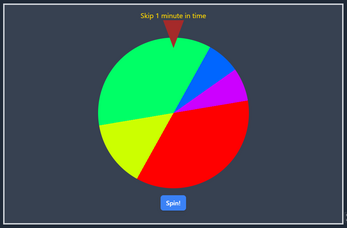